South Africa never leaves you, home is where the heart is and there is no place like home. Those sayings mean a lot to South Africans who returned back from overseas. Fran and Hylton Tannenbaum for example, returned to South Africa 1,5 year ago. They just moved into a beautiful new house in Cape Town in the surburb Pinelands. Their little girl Mia of 2,5 runs around the garden on her bare feet. Her chut curls dance around her cheering face.

The birth of Mia was the main reason why Fran and Hylton, both 33 years old, decided to move back to South Africa. We moved to London in March 1995, tells Hylton. We were both young, 23, and had been together for about three years. I wanted to go to the UK because the filmschools were much better than in South Africa. Fran went along and received a workpermit.

The Tannenbaums stayed in the UK for eight years. We werent unhappy in London. Actually we loved it. It is a vibrant city with lots of international people. There is a buz out there. And we had the chance to travell and explore Europe.

But the young couple, of whom Fran, worked in advertisement and Hylton moved to directing commercials, also found things rather tough in Londen. Like the costs of living, just trying to save money was impossible, no matter how much you earnt, buying property was impossible. And communting in the tube every day was so tyring, continues Fran. While in London you would be stuck in traffic after a hard day of work, you have the whole evening to yourself in South Africa. London was tyring. It was sleeping, working, sleeping, workingI missed relaxation in life.

The decision to return came after having a child. That was the turning point, a crossroad in our lives that made us overthink our life, says Fran. Hylton: We were easing into our careers, had lots of friends and family. But living in a two-bedroom apartment with a child wasnt too comfortable. Mainly not if you compare it to living in a house with a garden and having the beach and de mountains nearby.

Fran: In London Mia needed toys to play with because she mainly stayed inside, her she can discover the garden in the sunshine. And while lots of South Africans leave South Africa because of better jobs, moving back was a smart move for Hyltons career. Londen became very competitive. For shooting a commercial I would always pitch up against nine or ten other directors. And they would always see me as the foreigner. Here there are about three or four interested in the same job and the work is booming. My career surely has improved.

Family Tannenbaum isn't an exception. Although thousands of South Africans still emigrate each year, there seems to be an influx of South Africans returning. According to Martine Schaffer of Homecoming Revolutions, an independent and non profit organisation aimed at encouraging and helping South Africans living abroad to return home, there is a trend to come back to South Africa. "Returning is definitely on the increase. Every single day we have an enquiry of people who want to return home. Of our 1000 members that live overseas, only 10% say they will never return.

Amanda Lee Henry, import manager for moving company Elliott International, also notices the return of her fellow countrymen in the amount of shipments they need to transport back to South Africa. "From April 2003 till April 2004 we helped 139 South Africans moving their belongings back home", tells Henry. "This year we even had three or four people that arrived in their future home country and decided to move back to their motherland after seeing their new residence. They turned around their shipment. One of these cargoes belonged to a couple that was planning to live in Saudi Arabia. Says Henry: They were promised the world, but it didnt work out.

Emigrants often expect golden mountains and new opportunities in the country they are moving to. They set themselves high goals and have huge expectations. But adjusting to a new world isnt easy. Lots of countries dont have an outdoor culture and people are often less warm and more closed then South Africans. As South African Nico van Beest who lived in the Netherlands for six years said on the website of Homecoming Revolutions: "The culture is so different, those guys are so private you always feel like an outsider. You never get invited home to meet their families or spend a weekend, here it's common."

Schaffer of Homecoming Revolutions thinks that missing friends, family and the way of life are the main reasons why people return. Schaffer: "I receive e-mails from South Africans who left the country with their parents as a child and want to return now they are adults. They never had the feeling they fitted in. There are also people who feel other countries are soulless compared to South Africa and emigrants who want to come back to start a family and raise their kids. I myself lived in the UK for 15 years and returned last year. I wanted to give something back to South Africa and saw it as a challenge to return.

The main reason why people (60%) are leaving South Africa is violent crime, writes Johann van Rooyen in the book The New Great Trek. Besides this, the declining standards of healthcare and education and the chance at a better job, are also stark motivations to pack. Most of the countries the emigrants are moving to - in 2002 according to Statistics South Africa the UK (33,6%), Australia (14,5%), USA (10%) and New Zealand (8,6%)  are indeed safer then South Africa. But money wise emigrants are often put in the cold. Although the monthly paycheque will show higher figures, the costs of living will as well.

The exodus and return is not just white. Professional dancer and choreograph Mandla Mcunu grew up in Soweto but packed his bags in April 1999. The main reason for him to leave South Africa was that he couldn't find a job in his own country. "I lost my job as a dancer at the State Theatre Dance Company because it closed down. There weren't a lot of opportunities in South Africa so when I was offered the chance to work for a company in Denmark, I took it. The 35-year old Mandla ended up working with the best dancers of Denmark. After a few years in Denmark he was also invited to perform in Sweden and Poland.

Professionally the step to emigrate worked out great for Mandla. Says Mandla: It was easier for me to live in Denmark because at least I knew what I was going to eat at the end of the day. And although the people were more closed, mainly in Sweden, once you get to know them they were really friendly. Apart from that, the climate for artists was much better than in South Africa. Europe is far more tolerant in art. Theatre is more appreciated.

But it wasnt all roses. It was too expensive to have my own house so I lived with different families. I was the guest in their country and in their house so I always needed to adapt. And in the dance community, some of my colleagues would complain about immigrants working in their companies. They saw us as competition.

Mandla also longed for his own culture. I missed things I could relate to. I got tired only speaking English, not Xhosa. And I missed South African food, mainly the junk food. Of course there was a McDonalds in the cities were I lived but I mean the junkfood from the townships. And I missed South African tolerance, with coming late for example, and their warmth. In the township you look out for each other. Every kid walking around is your kid. You take care of them. In Denmark people werent so warm and it was difficult to make friends.

Dont get me wrong, I was happy in Denmark and I could have stayed longer, but home is were the heart is. You understand each other much better in your own country. Mandla decided to move back in 2002. I thought, I am one of the skilled people and I want South Africa to be the best country in the world. But how can it become our dream country when we are away from it? I always dreamt of having my own dance company and decided to bring back my knowledge.

I have to admit that I did not know where to start, especially because I had been away and felt a bit lost and not so much in touch with the happenings in South Africa, continues Mandla. I made a few investigations about what was happening back home in terms of dance. Things did not sound good or promising but I was missing home and I had this urge to form a dance company that would keep me and other South African dancers surviving at home.

To make these wishes possible Mandla got together with the Head of the Dance Department of Tshwane University of Technology and discussed the possibility of forming a professional dance company that would create jobs for graduates. The Tshwane Dance Theatre was formed. Although his company is still small (6 dancers) and is struggling to survive, Mandla says he doesnt regret his decision to return.

Mandla brought back his dancing skills and helped, although for a small part, to counterattack the brain drain. Schaffer says Homecoming Revolutions tries to promote South Africas good life mainly for the same cause. We need skills and every skilled person that comes back creates 10 new jobs. Of course there is crime and unemployment, we are aware of this, but we also must keep the positive sides in mind. Things have been improved in South Africa and it is important to spread that word. 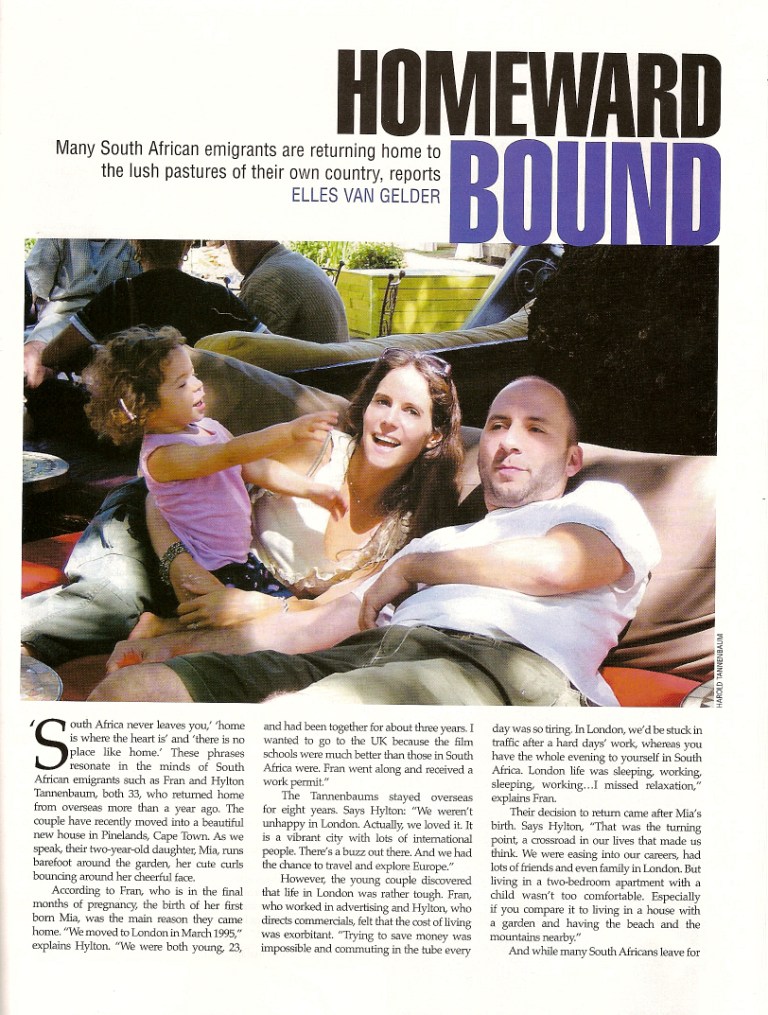